In Peaky Blinders: The King’s Ransom, you team up with the Shelby brothers to explore 1920s Birmingham and work through an original story developed in collaboration with the TV series’ creator and writer Steven Knight. The game features iconic locations from the show, and Maze Theory has gone to considerable effort to capture the spirit of the show and give fans ways to feel immersed in its world. You can take a cigarette offered by Tommy, for example, and smoke it over conversation, resting it in your mouth as you please. Whenever you remove it from your mouth, your character will breathe out a plume of smoke. It’s a nice touch that helps you feel more involved in the experience.
The demo only lasted about 20 minutes, running through the intro, some story beats, an interrogation and then a short combat sequence. While not show-stopping, the environments were atmospheric and aesthetically decent for standalone hardware. In terms of gameplay, though the characters models weren’t terrible – you’ll recognise characters from the show – their accompanying animations were stiff at best and janky at worst.
The King’s Ransom releases March 9th ,2023 for Quest 2 and Pico but is available to wishlist on Steam for PC VR now.

Read more about this here: https://uploadvr.com/peaky-blinders-vr-hands-on/ 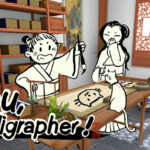 You, Calligrapher
Next Article hp Reverb G2: Black Friday US sale drops the price to an all-time low
Leave a comment Leave a comment

6 hours ago
@5gLimited Could you please share with me your ticket number? I will be happy to look into it right away.

8 hours ago
Want to see your designs defy gravity? 🧑‍🚀 Floating product photography has become one of the most popular… https://t.co/eMqQm7k2i5
1

14 hours ago
@DamienSwaby Hi, thank you for contacting us. We are sorry to hear about this, we'll do our best to resolve this AS… https://t.co/xy6T3HrGcu